Ceiling Leak Repair: How To Repair Leaking Pipe In The Ceiling 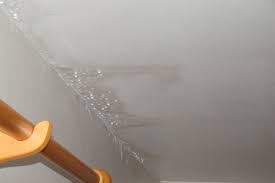 When water drips from the ceiling, you do not know whether it is a roof leak or plumbing leak. You might need a leaking pipe repair or the fixing of the roofing system to prevent water damage. So, look through the points in this article to understand what to do for a ceiling leak repair!

How Do You Know When The Ceiling Has A Leaking Pipe?

When water is leaking from the roof, it becomes difficult to identify whether this water leakage is due to damaged roofing system or a leaking pipe.

If the roofing system is faulty, the water will usually drip in the rainy season or due to ice dams. However, water leakage due to a leaking pipe or plumbing leak will be continuous and persistent. So, let’s see some of the differences between these two leaks to know when your ceiling has a leaking pipe.

So, if you look closely for the source of water leakage, you will find these differences. Based on this distinction, you can identify the actual cause of water seepage. So, you will take necessary steps to either fix the roofing system or go for the leaking pipe repair.

10 Steps: How To Repair A Leaking Pipe For The Ceiling Leak Repair

Once you are certain that a leaking pipe has caused the water damage, then try for ceiling leak repair. Repairing a ceiling leak involves specific steps and methods to fix the leaking pipe. You need to learn about these techniques before delving into the repairing and fixing of these leaks.

So, here is the systematic approach for leaking pipe repair in the ceiling.

1.  Shut Down The Electricity

The first thing you need to do is turn off the lights and shut down the electricity supply. You can switch off the breaker box in the home. Even if there isn’t any light on the ceiling, you should still turn off the electricity.Because there could be any wiring under the ceiling, you are about to repair. So, you will be safe and can move the wires aside without any threat while fixing the leak.

2. Turn Off The Water Supply

The next step that you need to take is to turn off the water supply to stop the leakage. So that the damage occurring to the ceiling can reduce; also, it will be difficult to work on the leakage with water dripping on your face.

3. Lay Down A Dry Cloth Under The Leakage

Then, lay down a dry cloth or a plastic cloth on the floor, under the leak. That way you will save your furniture and floor from further wetness and damage. Also, it will collect the dirt and debris coming down from the ceiling when you will repair it.

4. Put A Container Under The Ceiling Leak

Now, put a bucket or container under the ceiling leak, and on the dry cloth. This bucket will help collect the water seeping from the ceiling leakage. It will catch water to stop its flow and to save your floor, once you begin draining the leak.

Use sharp tools, such as screwdrivers, to puncture a hole in the ceiling at the location of the leak. Create the hole carefully and larger enough for a steady flow of water. The water will start draining from the ceiling and collect in the bucket, placed underneath it. With this process, you will prevent further damage to your ceiling and relieve any other water damage.

If the water stays under the ceiling, it can weigh down the ceiling and collapse it. Also, the seepage can increase over time with a large quantity of water leakage. The hole you will create, it will also help you identify the source of water leak.

6. Cut Down The Drywall

Now, it is time to cut down the damaged area of the ceiling. You need to use a saw to cut the wet spot and damaged portion of the drywall. However, you should be careful before bringing down the drywall.

Create a small hole first and inspect if there are any electric wires, pipes, or gas lines. You might need help from a plumber if you find these under the ceiling. Moreover, chunks of the drywall can fall from the top, so take care of that as well while working.

Look inside the ceiling opening with the help of a flashlight. You need to find the exact place of the pipe leakage to repair it.

Once you identify the damage, repair it if you can or call a plumber. The leaking pipe repair depends on the damaged area or portion. You might just need to warp the pipe with fibreglass tape or seal the leak.

Dry the pipes and the ceiling before patching up and repairing the drywall.

10. Patch Up The Ceiling

Lastly, you have to close and patch up the hole in the ceiling.

When To Call In A Plumber In Singapore

If the ceiling leak repair is minor, you can handle it on your own. However, in case of bigger damages or tricky situations, you will not be able to patch up the ceiling. Also, it can be challenging to understand whether you need to fix the roofing system or go for the leaking pipe repair.

An experienced plumbing contractor in Singapore would know how to address all these problems. When you need help, contact Heng plumbing and repair your ceiling leaks, leaking pipes, or any other plumbing issues.